Eric Dier is delighted to be back in the England squad after a “very difficult time” punctuated by injury, illness, spells out of the Tottenham side and a ban for climbing into the stands to confront an abusive fan.

The 26-year-old finally feels back on track after a challenging period that kicked off when illness blighted his recovery from emergency surgery to remove his appendix in December 2018.

Dier fell out of favour under Mauricio Pochettino but kicked on under Spurs successor Jose Mourinho – only to be hit by a four-match Football Association ban for kicking off at a supporter in March.

The Spurs player was also fined £40,000 for climbing into the stands to confront an abusive fan after the home FA Cup exit to Norwich in March – where his brother became involved.

It all combined to make for a challenging period for Dier, who is delighted to be back in the England fold and in line for his first cap since last summer’s Nations League finals.

“It was a very difficult time for me,” he said in an interview with talkSPORT and BBC Radio 5 Live.

“I actually felt very good going back for pre-season last season, but then I had a really unexpected surgery that made me miss pre-season and kind of threw me off.

“From there it was very difficult and an up-and-down season, so it wasn’t enjoyable and I had to just stick at it and work through it and try and get back to where I was and then move on past that. I feel like I’m on my way to doing that.

“I’m really, really happy to be back.”

When quizzed about the incident in the stands, Dier said: “People have asked me about the stand incident and there will be a time where I’ll talk about it – but it won’t be while I’m playing in England.

“I said afterwards and I’ve said before it, I try and carry myself in the way I see best as a person, irrelevant of where I am – if I’m representing England, Tottenham, I’m representing myself outside of football.

Dier is focused on the future rather than the past, which is part of the reason why he has not watched the Tottenham mini-series which is currently the talk of the town.

“I guess it’s been the talk of anyone that knows me, everyone’s watching it so everyone wants to talk about it,” he said.

“It’s only just out but I know some of the boys have watched it already. I’ve talked to them a bit about it.

“But it’s obviously not the most enjoyable for us given the season that we had. 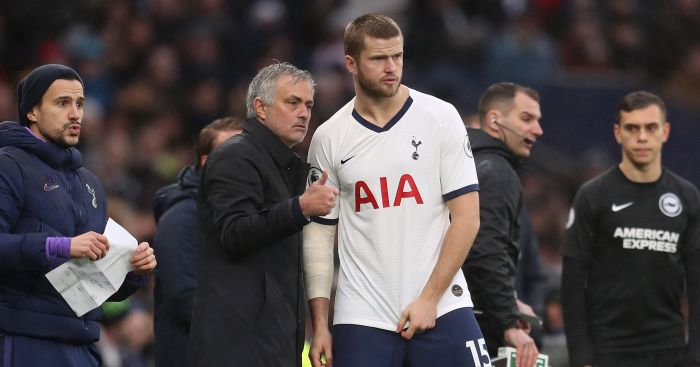 “But it’s always nice if you can give fans an insight which they wouldn’t normally get. I think that’s nice for them.”

Dier hopes Amazon’s All or Nothing series gives people the chance to see another side of the people and players at Spurs, where he recently signed a new four-year deal.

Most of his 240 appearances for the club since joining in 2014 have come in midfield, but England have listed him among their defenders as he looks to transition into a permanent centre-back role.

“I felt like I was always having to be trying to avoid the question and trying to be politically correct for what my situation was at my club,” he added.

“I always knew there was going to come a time where I’d kind of need to put my foot down and I just felt like now was the right time.”