Goalscoring sensation Erling Haaland has left the door open on a future move to the Premier League.

The prolific 20-year-old, who was a top target for Manchester United in January, admitted  “you never know” what will happen after being asked about his future on Monday night.

Haaland scored twice in Norway’s 5-1 win over Northern Ireland on Monday night. That was on the back of a goal against Austria over the weekend, and he now has three goals from four Norway caps.

When asked on Sky Sports whether he saw himself in the Premier League he said: “First of all I’m very happy in the Bundesliga but you never know what will happen in the future.”

Haaland responded: “They are some huge words and I appreciate that.

“First of all I want to try and be the best player I can, work hard everyday and to try and enjoy my life as much as possible. You saw the game tonight, that is why I play football.” 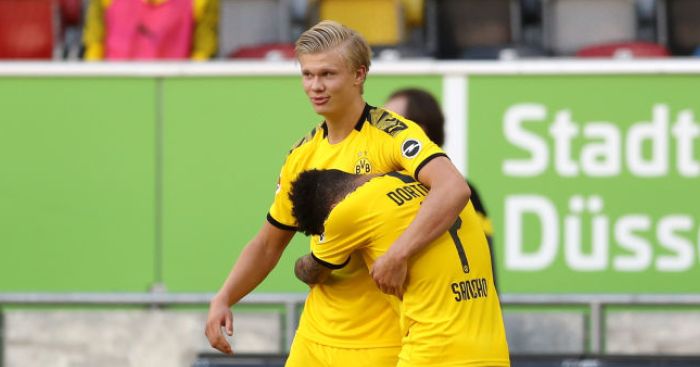 Haaland’s exploits in the first half of last season for Red Bull Salzburg had attracted the interest of Manchester United and Real Madrid.

In the end though he opted against linking up with his old Molde boss Ole Gunnar Solskjaer and signed for Borussia Dortmund.

The Bundesliga side paid Haaland’s release clause of €22.5m, while also handing his advisor, Mino Raiola a €10m payment, and then immediately slapped a release clause in his four-and-a-half-year deal.

According to the German publication Sport Bild, Haaland’s agent has negotiated a €75m buy-out fee that will only come into force after this summer’s transfer window.

And while Solskjaer was licking his wounds, Haaland scored a hat-trick on his debut despite only coming on as a second-half substitute.

He went on to score 16 goals in 18 games and it led to reports that United were still keen on a move for the striker.

ESPN reported in April that United still had hope of signing Haaland if they can meet the striker’s release clause.

Ntseki on joining Kaizer Chiefs: I already feel at home, being a Motaung

Arsenal provide updates on Luiz, Xhaka and more ahead of West Brom