Ahead of the new season, we take a look through the contenders for the 2020/21 Premier League Golden Boot – will Jamie Vardy reign again? Can Salah or Kane regain? And what about Eddie Nketiah?

Salah doesn’t even play in the centre of Liverpool’s attack but his goal record with the champions makes it clear why he’s the joint favourite for the Premier League’s Golden Boot. A record 32 goals won him the prize in 2017/18. He shared the gong the following season with 22 and then bagged 19 last term. With 73 goals in 111 games for the Reds, he averages one every 1.52 games. He’ll score 25 this season if that average is maintained and playing in a team which dominated in 2019/20, he will surely contend to win the Golden Boot again.

Given Kane’s goalscoring consistency, it’s hardly a surprise to see him rated joint favourite alongside Salah. He’s netted 143 in 210 Premier League appearances, winning this prize in both the 2015/16 and 2016/17 seasons. He also finished second in 2017/18 when scoring 30 goals. However, he’s failed to hit 20 in the past two campaigns which can basically be put down to injury. He failed to play 30 games in either season. Kane played only 30 in his last Boot-winning season so this gong can be won be a player missing a chunk of games but potential backers may have concerns.

Towards the end of last season, Aubameyang reached the 50-goal milestone in the Premier League. He did so in just 79 games and thus became the sixth fastest to 50 in the league’s history. That’s quicker than a certain Thierry Henry. The Gabon international clearly knows his way to goal but anyone backing him at 6/1 in this year’s Golden Boot race does so under the cloud that is his contract situation – Aubameyang has just one year left on his current deal. Many had expected him to have signed an extension by now. In short, he’s far from certain to still be at the Emirates – or even in the Premier League – come next month’s transfer deadline day. 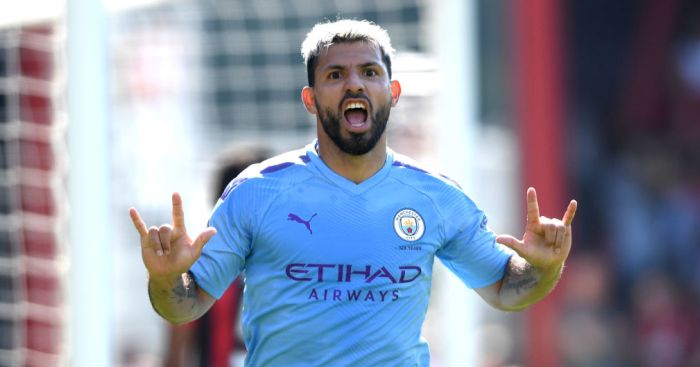 This will be Aguero’s 10th season in England and there have been few better strikers in the competition’s history. In the previous nine, he’s hit 20 goals on six occasions so backers of the Argentine seem likely to get a run for their money. But he’s only won the Golden Boot once before with injuries often hurting his chances. That was the case last season when he played only 24 games – his lowest number of appearances since 2013/14. With Gabriel Jesus also in the City squad, Aguero also tends to find himself on the bench more than some of his Boot rivals.

The England star’s goal output has risen considerably under Pep Guardiola with Premier League tallies of 20, 17 and 18 over the past three seasons. But he’s disadvantaged in two ways in Golden Boot terms. First of all, he’s not even the highest-rated Man City player in the market (Aguero is) and secondly he’s the first man on this list who isn’t his club’s regular penalty-taker. On the plus side, City have scored the most goals of any team in the last three seasons, the team averaging over 100 in that period, so there may well be plenty of goals to go round.

After scoring 28 times in 34 Bundesliga games for Red Bull Leipzig last season, Werner arrives in England with expectations high. But anyone thinking he’ll win the Golden Boot should at least note that no foreign player has won the top-scorer prize in their debut season in English football. Some have come close – Fernando Torres probably being the best example with 24 in a season which saw Cristiano Ronaldo net a then-record 31 – but adapting that quickly is undoubtedly hard. Even Thierry Henry ‘only’ managed 17 in his debut campaign which puts into perspective the task facing the German at an admittedly strong-looking Chelsea.

Mane was a joint winner of this award two seasons ago with a total of 22 goals and last season he backed that up with a solid effort of 18 – many of which were key goals to earn Liverpool wins on their march to the title. But, like Sterling, he’s not on penalties. Salah (or James Milner) is and that helps explain why Mane is almost three times the price of his team-mate. Should again score plenty but probably not enough to win this prize.

It’s rare that the Golden Boot holder goes off the following season at 16/1 but that’s the case with Vardy. Some will be concerned about his age – at 33 he’s the eldest of the market’s top eight contenders – and last season’s effort has already set a new record for the oldest winner. Of more concern is how Leicester will perform. After a stunning first half of the season, they won just 23 points from the last 19 games to finish only fifth. The bookies expect them to slip back this term and if that’s the case it will surely hurt Vardy’s chances.

Best of the rest…

Goalscoring midfielders such as Frank Lampard and Steven Gerrard have forced their way into the places in the Golden Boot race in seasons gone by – bookmakers usually pay out to each-way punters on the first four – and Fernandes looks to have a strong chance of doing that this season. The attack-minded Portuguese added much to Manchester United upon his arrival in January – in particular goals. In all competitions for United, he’s started 21 games and scored 12 goals. Importantly, he’s on penalties too – and has a remarkable record on them too. With United winning more spot kicks than any other side last season, this could be a key factor in Fernandes’ favour.

Few players ended 2019/20 in such eyecatching form as Mason Greenwood and the 18-year-old was duly rewarded with an England debut. His fearlessness and willingness to shoot are reminiscent of Wayne Rooney at a similar age and seen him already labelled ‘a complete goalscorer’. Even if United do sign forward reinforcements (Jadon Sancho is looking increasingly unlikely to join) Greenwood has made it very hard for Ole Gunnar Solskjaer to leave him out. Maybe the worry is that his tender age will result in a reduced workload which would thus damage his top-scorer chances.

Only the brave will probably be prepared to back anything to do with Everton, who have spent big for several years now without any real sign of improvement. But there is reason to think this summer could be different. With James Rodriguez set to join Allan at Goodison Park and the Toffees continuing to chase Abdoulaye Doucoure, there appears a good chance their midfield will be completely revamped with much-needed legs put into it. That could well lead to greater chance creation and Richarlison, one of his club’s most consistent performers over the past two years, is capable of profiting. He’s scored 13 in each of the past two seasons and the 23-year-old has the quality to push on to 20 if Everton are notable improvers.

If there’s one player who might just be worth backing at a massive price in this market, it may well be Nketiah. Since lockdown ended, he’s played a lot of games at centre forward for an Arsenal team who are on the rise under Mikel Arteta. Those matches included this season’s Community Shield. Arteta clearly likes the 21-year-old, who netted four times in nine starts for Arsenal in the second half of 2019/20. Prior to that he had struggled for starts at Leeds but did score three goals as a sub – the majority of his appearances from the bench being 20 minutes of fewer. It’s not a spectacular record but one worthy of respect. Were Arsenal’s main goal threat Aubameyang to leave, Nketiah’s stock would rise further.

(All stats for 38-game seasons only)

In 28 Premier League seasons, there have been 35 Golden Boot winners (including joint winners), only nine of whom have played for the champions.

In the last nine seasons, the Golden Boot winner has played for the champions just once.

In only six seasons in the Premier League era has the Golden Boot been won by someone playing for team which finished outside the top four, although it has happened in the last two campaigns:

18.1 – Average goals scored to finish 4th in top scorers’ list (and claim an each-way place in the betting)

Arsenal stall over deal for Matteo Guendouzi amidst contract uncertainty