Luis Suarez has taken to social media to dismiss continued speculation that he’s on the verge of leaving Barcelona for Serie A giants Juventus.

The former Liverpool star’s days at the Nou Camp looked to be numbered, according to reports.

The view was that new Barcelona boss Ronald Koeman didn’t see the Uruguay striker as part of his plans. Suarez’s contract has less than a year to run and there were claims that it could be terminated by mutual consent.

That would allow the frontman to move on and Juventus were believed to be his most likely destination. Indeed, some stories claimed he’d agreed terms on a £9million-a-year salary with the Italian champions.

But Suarez isn’t buying into that narrative.

Instead, he took to his Instagram story and posted: “While fake news comes out… I’m good”. 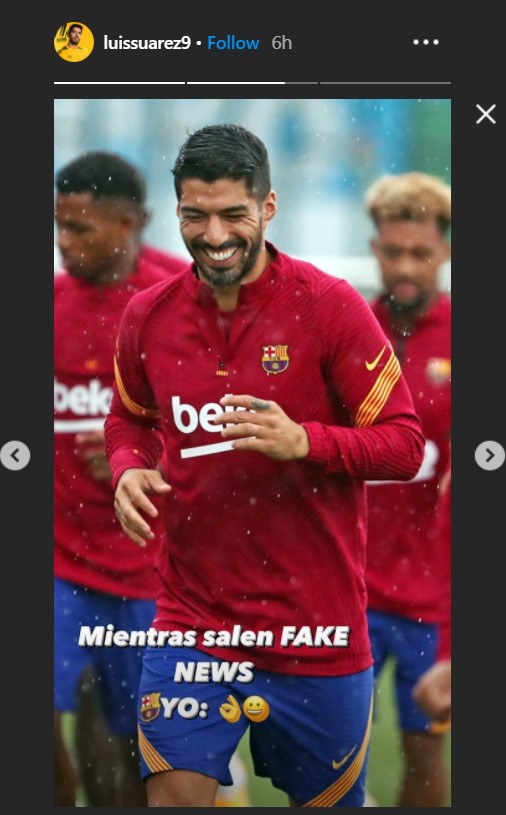 Suarez is shown smiling during training with his Barcelona colleagues. And that contradicts claims he had been asked to train alone ahead of his proposed move.

It seems his preference is to stay at Barca and fight for his place. Even if it means a reduced role under Koeman.

Vocalising that intent to El Pais last month, Suarez said: “I would accept it here as I have always accepted it in my career.

“Competition is always good and if the coach considers that I should start from the bench, I have no problem helping with the role they give me. I think I can still contribute a lot to this club.’

Coutinho could get second chance at Barcelona

While Suarez will need to convince Koeman, it seems his former Liverpool teammate Philippe Coutinho could benefit from the change of coach.

Coutinho has failed to make the expected impression since his big-money transfer from Anfield in 2018. A loan move to Bayern Munich also didn’t go as planned although the Brazilian scored twice for the Germans as Munich humiliated Barca 8-2 in the Champions League quarter-finals.

Now back at Barcelona, Coutinho could get a second chance with Koeman opting to deploy him as a central midfielder.

That’s come as bad news for Arsenal, who were looking to swoop.