Everton boss Carlo Ancelotti picked out one reason why his side have made such an impressive start to the season.

The Toffees made it seven wins in seven across all competitions after dismantling Brighton 4-2 on Saturday.

The turnaround in form and quality of football is stark compared to last season, and Ancelotti insisted that when you bring quality in, the game becomes simple.

Speaking to The BBC following the contest, Ancelotti said: “Brighton played well. We played well also. We managed the situation of the game well.

“We had composure defensively and had opportunities on the counter attack. The performance was complete and this was the reason we deserved to win.”

James Rodriguez was the star of the show, with the Colombian quickly putting to bed the notion that his best days were behind him.

“As I said on the first day, the players with quality have not a problem with that (settling in),” the Italian said of Rodriguez. 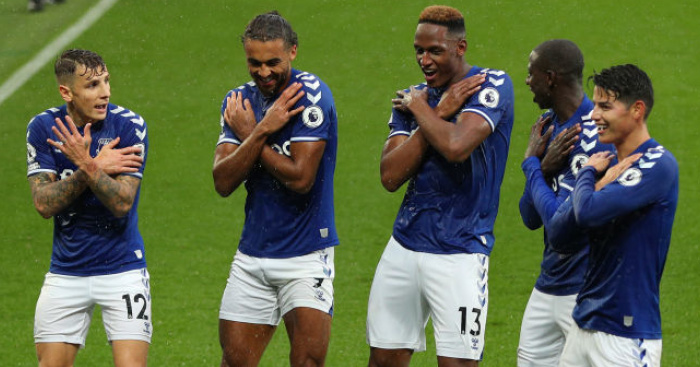 On Dominic Calvert-Lewin’s impressive start to the season: “There is not just one reason. He is confident, we are seeing him improving and he is scoring goals and that is the most important motivation for a striker.

“This is the moment of Dominic Calvert-Lewin now.

“We are optimistic now for 15 days because there is a break but then we will have a fantastic test, the most difficult test against our neighbours.”

Calvert-Lewin on another magnificent Everton day

Everton striker Dominic Calvert-Lewin speaking to BT Sport: “I think today, particularly in the second half, we didn’t play that well. The best teams win when they’re not always on top. We’re confident, creating chances and scoring goals.”

Regarding his red-hot form, the striker said: “I think it’s about self-belief. I always believed that I could get here. Sometimes it’s about age and maturity. I’ve been patient, now I’m reaping my rewards.”

Calvert-Lewin recently received his first call-up the the England senior squad, and admitted it’s something he’s thought about for a long time: “It’s something I’ve dreamt about and been working very hard for. I’m ready to go in and make my mark.”

On James Rodriguez: “He’s a top player. You see when he gets on the ball the quality he’s got. He opens up spaces for other people on the pitch.”

Solskjaer to make future decision on attacker after ‘broken promise’