Leeds boss Marcelo Bielsa pinpointed the one aspect of the match that his side struggled to get to grips with despite coming away with a commendable 1-1 draw with Man City.

After their all-action display in the season opener ran champions Liverpool close, anticipation was high to see what Leeds could achieve against Man City.

The Whites did not disappoint, going toe-to-toe with their expensively-assembled opponents for the entire duration of the match.

Each side could’ve scored half a dozen, but both had to settle for just one goal each as the points were ultimately shared.

Speaking to the BBC following the match, Bielsa said: “The start and the end were with City and the end of the first half and the beginning of the second half were a bit better for us

“For them to be superior to us is pretty easy for them, it doesn’t require much effort, whereas for us it requires us to go to the limit to be on their level.

“We couldn’t take the ball off them and they were taking the ball off us very easily. We did it with a lot of effort, a lot of aggression to win the ball back and the confidence in our game grew.

“It wouldn’t have been fair if we had won the match, it would’ve been possible, but not fair.” 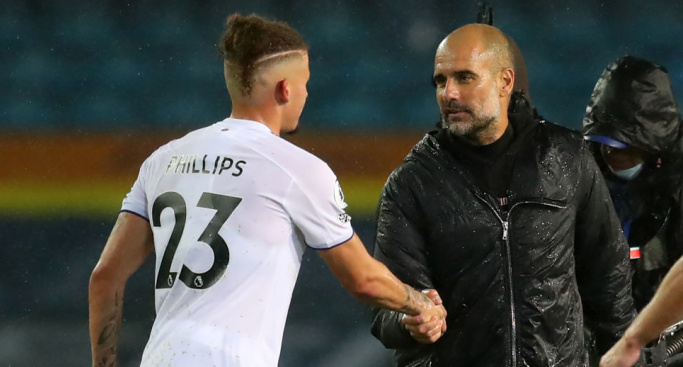 Leeds captain Kalvin Phillips performed admirably in the middle of the park, and was understandably pleased to come away with a point against such strong opposition.

“We’re just happy to get a point against a really good side,” he told Sky Sports. “We knew they have weaknesses defensively, which you don’t get too often when you’re playing good teams like that.

“To be fair a lot of our play goes through me, but they tried to catch me out so I knew I had to change my game and get on the ball in different ways. We did that in the second half.

“I think we gave them a little bit too much respect in the first 20 minutes. We came out in the second half, made a couple of tackles and counter-attacks and had a real go.”